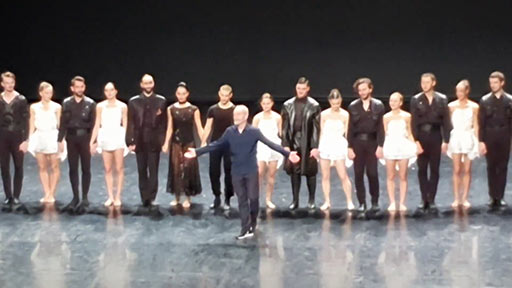 He is not a visionary as Rimbaud was, no, it is something else.  Le Parc, a short time ago, already showed us what he could see of the couple of the man and the woman, when she flies to his neck in the impossible hope to make One and that he turns so fast and so strong that the powerful centrifugal effect inscribes them in square to each other, in the infinite erection that becomes the body of the one to the body of the other.

Nothing of such in Swan Lake, where the rising bloom of the flowers of white dresses, joined together in innumerable ways, imposes on us a beauty whose surprise is constant, of which the photos relate some poor snippets.  Not that kind of thing that is called "glamour" today, a glutinous word made to forget the beautiful as if it had become obscene. But that which strikes and takes you away at mercy, doesn't ask for your opinion, something at that moment that Prejlocaj saw, that you couldn't see. He assembles these bodies dressed in a vaporous white into a major bouquet that undoes and breaks up before it makes sense, then dissipates into other grammars. On Tchaikowski's notes, immediately recognized, which remind us each time our attention becomes light, a repeated miracle, a familiar melody that resounds, immutably powerful, in all the choreographies that have been measured against it, like a tune that would never have left us, he gathers with an infinite grace white garlands, festoons, tutus and legs that cross.

And then comes the couple. Ah! the two of Anjelin, undulating softly, rightness of who desires enough to wait! We follow distractedly the story of Odette changed into a swan, of Siegfried who seeks her and of Odile, black double who seduces him horribly. But it is to their dance that we are riveted, to their white bodies that undulate, to their black bodies that glitter and leap like exclamation marks. Hemming and hawing to the apotheosis of their disproportionate destiny, exhausting their long-renewed breath, they end in two as they began. They won't make one but they can make a thousand.

Prejlocaj awakens the magic of numbers, their strength and their secret. He seizes from the birds the identical multitudes that assemble in an imperial form, like an impulse with a thousand heads, in a being whose beauty rises from having made number in a dense row. He sculpts a gesture as many times reproduced, shifting it a note each time he repeats it, within the great body that is invented, and the same gestures thus worked give life to what had none. He learns from the birds the chiseling of the forms assembled in this body, those which in squadrons draw in the sky these battalions of graceful wings, at this constant distance which gives the illusion that there is only one huge body there, which one could not identify when one knows each element.

To tell us about the lovers, Prejlocaj places them at the base of a triangle whose sides are the swans aligned in their white wings, so gracefully posed that it writes the beauty at the same time as the letter. He writes the beautiful according to the sign, he writes the beautiful as the swan and the swan as the beauty of the letter. Then in its center undulates, infinite caress, this embrace of the couple formed by the lost white swan that must be saved, this Odette whose lover named Swann in Proust is as delighted to take her as to lose her. At the point of this moving triangle, the lines of swans are arranged, whose softness gathers to frame the dance of the couple, who does not know.

Who doesn't know that his union breaks, black swan, curse, cruel father: at the base of the triangle, one doesn't know that there is no place for this love.  The ruminations of the beings enjoying hate dance as well as the fragile injunctions of love. The black of the swans pretends that the beloved is the same when she is black or white, hardly more agitated. And from the bush of the bodies this time emerge not blossoms of petals, but innumerable raised arms that stand at the pace of armies on the march. Prejlocaj sees the boots marching when the birds have left.

In each of the assemblages that he builds for us, a new reality rises up, breathtaking in its number, and yet simple when its form seizes you like an unsuspected alchemy. See: he assembles three bodies, who kneel down sending their right leg forward, while far above their heads their arms are extended by joined hands, like a prayer. He dresses these bodies in the white of supple, vaporous tutus, petals are deduced from them and flowers too, a new reality emerges in the half-light, digging its bluish scene of candelabras made of sacred tripods.

From now on, whether he makes the black swan's vigor heard with an evil boot, whether his pirouettes tighten, brutal, when those of the whites undulate, whether at the bottom of the water the couple undulates like a voluptuous seaweed when it is the ferocious jouissance of the other which in truth lifts it, through all this he brings us little by little, doubting until the end, to the dissolution of the dancing bodies. When Siegfried finds the ballet of the white swans and they are there posed, it seems to you that love has won, that the dark designs and obscene packs his ardor has won. But when the dance brings his love back, that love is dying. The beating heart of flowers and swans has folded its arms and withdrawn its legs.

You are there riveted to what Prejlocaj the enchanter has seen, like the poet he has seen sometimes what man believed to see.

What else? Oh yes! They say that the video of the skyscrapers is too... Bof...!