About the choreography of Ravel's Bolero, organized by Marc-Antoine Bourdeu, with dominique Brun, September 11, 2021, at Espace analytique. 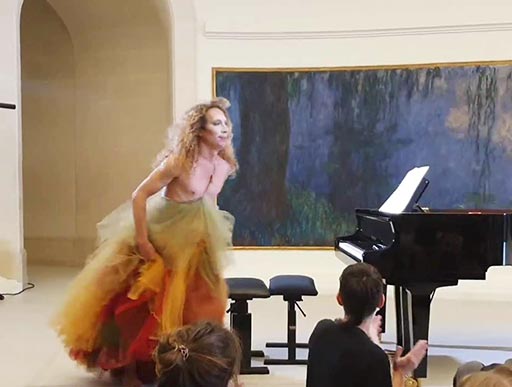 Revisiting Dominique Brun's choreography of the Bolero, after having reflected on it, makes even more clearly apparent what in psychoanalysis is called a condensation, certainly of two genres, but also of the history of the successive choreographies of this music written by Ravel at the beginning of the 20th century. They plunge into the heart of what marked the evolution of the conceptions of sexuation, of the sexes, of the genders, and of their rapport, and constitute a metaphor in a way, where we see the grammar and the vocabulary evolve, the logic and the meaning of the societal reorganizations. They are part of this history of sexuation, when the music of the Bolero has long been a kind of symbolic representative of this century.

The choreography of Bonislava Nijinska, which Dominique Brun has reworked in the original, is the first of the choreographies of Bolero, it was danced on November 22, 1928 in Paris, then directed the following year by Ravel. 1928, the year of Lady Chatterley as it was underlined, work to which I was very interested in it by finding there some premises of what later will animate the vast theory of the absence of the "sexual rapport", where Lacan observed, long after DH. Lawrence, the obstruction of what is called sexual rapport and indicated how a law was substituted to govern the relation of the sexes, founded on the disposition of one by the other, whose logic he deciphered.

Nijinska's choreography, commissioned by Ida Rubinstein, at the same time as the music of the ballet to Ravel, whose patron she was, was constituted of the dance of a woman surrounded by men. Pierre Michaut (Le ballet contemporain), describes “a chorus of fascinated men”, “carried out of themselves by obsession” leaping beside the dancer, with forceful appeals and challenges, who at the end seize her and raise her above their heads. It is a scene of intense erotic weight, which the music accentuates, where the woman's dance wraps around herself in the gaze and desire of the men. An elegant quintessence of a patriarchal grammar of sexual relations, as much for the brutal relationship to the object of desire as for the ideal impulse that can sometimes go with it.

Twenty years later, in 1950, the same grammar resonates in a more complex way in Kurosawa's Rashomon, whose music is an adaptation of the Bolero, playing out the four versions of the murder of a samurai by a bandit who has raped his wife, a version that is contradicted by the other protagonists who all accuse themselves, including the dead man and the woman.

Ten years later, Bejart's first version of Bolero is performed, the first of four in all. He himself adopted a precise grammatical succession to transform this scene. In 1961, he still stages a woman surrounded by men, which will be qualified by Paul Bourcier, (Histoire de la danse en Occident), of "brutally primitive for the theme", and of "refined for the realization". Twenty years later, the same Bejart changed the equation: a man was at the center, the star Jorge Donn in particular, and women surrounded him. Then, in June 1979, the stage is now exclusively composed of men, the most represented choreography. Now it has practically abandoned the eroticism of the origin, it takes rather the appearance of an initiation, it has left the sex to join the unisex. The equation of the desire has so crossed a series of logical transformations, woman in the middle of the men, man in the middle of the women, then man in the middle of the men.  The erotic exaltation was transmuted into ecstatic initiation, says Philippe Le Moal, (Dictionary of dance.) However, a fourth choreography of Bejart exists on the Bolero, which we do not know. It was performed only exceptionally, in 2004. And it is the only one in this ensemble that dared to stage and confront the couple of a man and a woman, not for very long it must be said! This story of the Bolero is indeed a reflection of our century, where the fragility of the sexual couple is revealed.

Bejart says this: "The implacable confrontation, monotonous and brilliant, between a melody that seems to roll up on itself, like the original snake, and an unchanging rhythm, is it not the image of this cosmic struggle between the undulating and lunar feminine element and the masculine principle, of which the sacred or popular rites, the festivals and the dances are always more or less the image? [1] "  The metaphor thus invokes the serpent of the Bible, not only as a tempter but as an equivalent to the woman, who has disappeared from the main version.

Dominique Brun's version, which we saw at the Orangery, sharing the writing with the dancer François Chaignaud, is interpreted by a man alone, but he is not alone in fact since he wears long hair and a long dress. He carries alone and in himself the rapport of the man and the woman. Not only the identification of each, but also their rapport. It is thus a new interpretation as for the sexuation, which condenses something of each in sum. The idea of this costume, which features a man without a woman, but dressed and coiffed as a woman, carrying the woman inside him, is a new step in the evolution of this grammar of the Bolero. Dominique Brun reverses again the sexual equation, perhaps also in the image of our social evolution. She says that this dancer carries a multiplicity by being the man he is, and the woman he shows at certain moments. She tells us that she wanted to counter the unbearable binarity of the Bolero's choreographies and to carry the difference instead, and we feel in which sense she says it, since certainly a man dressed as a woman blurs the image of the genders, but that does not avoid convoking the two otherwise.

The Lacanian theory of sexuation, which we use, does not describe a two of sex, on the contrary it shows that there is none. For the preferential logics of the two sexes are asymmetrical, and each one chooses it without the biological sex being entirely determining, that of the man is phallic and only phallic, that of the woman is shared between the phallic and what is not. In a rapport this does not make two, it makes much more! In opposition to the fiction of the sexual law, which makes much less, one and its object.

This research of the ancient writings of the dance is fascinating, so much the report to the body and to the sexed body evolves and particularly in its danced language, so much it is in some way a living document of history. I would like Dominique Brun to tell us what is her own part in this choreography compared to the original version of B. Nijinska. (The whole of the exchanges was recorded by M.A.Bourdeu for Danse et psychanalyse)